Because of rapid growth of population and limited land resources, building remodeling with vertical extension becomes an economical and effective way to enhance the utilization of existing buildings. In Korea, the government has published a statement that apartment buildings with more than 12 floors aged more than 15 years could be vertically extended up to 2-3 floors (MOLIT, 2013). In this case, foundation underpinning is essential to enhance the bearing capacity and reduce the settlement of an existing foundation in order to resist to applied loads from additional floors. Several technologies are available to underpin foundations (Thornburn and Littlejohn, 2014; Cole, 1993). Due to a limited spacing between existing piles and applicability for in-situ construction, micropile underpinning technology is widely used for existing foundation.

A micropile is a small-diameter, drilled, and grouted pile with a central steel bar. Generally, micropiles are between 100 and 300 mm in diameter, 20 m to 30 m in length, and 300 to 1000 kN in compressive or tensile service load (FHWA, 2005). The installation of micropiles causes minimal disturbance to adjacent structures, soils, and the environment. They can also be installed in restrictive conditions at any angle. The technology of micropililing was introduced by Lizzi in the early 1950s (Lizzi, 1982). Since then, it has been widely used to reinforce existing foundations in static and dynamic environments and support slopes since the 1980’s (Bruce et al., 1985; Han and Ye, 2006a; Han and Ye, 2006b; Isam et al., 2012; Sadek et al., 2004; Babu et al., 2004; Esmaeili et al., 2012).

A 3D numerical model was developed to simulate a series of cases of foundation underpinning with finite element code PLAXIS 3D (Plaxis, 2005). Fig. 3 exhibits a schematic sketch of the numerical model developed in this investigation. The model consisted of a 4×4×1 m raft with four existing piles (EP) and one underpinning pile (UP). General prestressed concrete piles (PCP) widely used in 1990s as foundation components were modeled as existing piles. Three conventional micropiles (CMP) with different lengths and one waveform micropile (WMP) were used as underpinning piles for comparison with the micropile’s underpinning effect. Details of the size of these piles are presented in Table 1.The mesh was extended in both horizontal direction to a width of 10 m and vertical direction to a height of 20 m. Soils are divided into layers in this analysis: 0-8 m of sand layer and 8-20 m of rock layer. Soil behavior was determined as Mohr- Coulomb model. Not considering material failure in this analysis, prestressed concrete piles and micropiles were modeled as linear-elastic model. As conventional micropiles consist of grout materials and a central steel bar, to simplify the simulation model, composite young’s modulus Etot combined with material of grout and steel bar was used. It is defined as follows:

For waveform micropile, due to complex configuration of the pile, models of grout component and steel bar were built separately. Grout was modeled as linear-elastic solid model while the steel bar was modeled as beam elements. Fig. 4 shows the geometry of an example of a conventional micropile and a waveform micropile in numerical analyses. Material properties of soils and piles used in these analyses are shown in Tables 2 and 3. They were taken from Wang et al. (Wang et al., 2017; Wang et al., 2018a; Wang et al., 2018b). The soil-pile interface was described by Rinter, the interface strength reduction factor (Plaxis, 2005). Rinter was defined as:

Modeling of Micropile and Foundation in Plaxis

Fig. 5 presents the load-settlement behavior of five single piles under compression. The curve clearly shows that the WMP has higher load capacity than conventional micropiles. Because of no significant failure point shown in the curve, the ultimate bearing capacity of each pile was estimated corresponding to pile head settlement of 25.4 mm (Terzaghi and Peck, 1967; Touma and Reese, 1974). Failure mechanism is considered to be developed only in the soil due to the assumption that no failure occurred in the pile material. A factor safety of 3 was applied to calculate the allowable bearing capacity of single piles. Table 4 summarizes the proposed allowable bearing capacities of PCP, CMP1, CMP2, CMP3, and WMP (567 kN, 328 kN, 400 kN, 483kN, 877 kN), respectively. Shear keys along the pile’s shaft enhanced shaft resistance in both compressive stratum and bearing stratum compared to conventional micropiles for which the shaft resistance was mainly mobilized in the bearing stratum. Bearing capacity of waveform micropile was 1.5 times more compared to prestressed concrete pile and 2 ~ 4 times more compared to conventional micropiles depending on pile’s length. Trends of numerical results in the present study are in agreement with those reported by Jang and Han (2018).

Axial stiffness kv of a pile is defined as the slope of load- settlement curve. It can be obtained from single pile loading test under compression based on properties of the pile and soils (Randolph, 1994) or empirical equation based on numerous field data (KHS, 2008; Koichi et al., 1996). The empirical equation proposed by Korea Highway Bridge Design Standard (2008) is shown below:

𝛼 is stiffness factor depending on the type and construction method of piles as follows:

In this study, prestressed concrete pile (PCP) used as existing pile is a kind of precast driven pile. Eq. (4) was used to calculate PCP’s axial stiffness. Micropile used as underpinning pile is a kind of cast in situ pile. The value of Young’s modulus and area of each pile for calculation is in accordance to the data used in numerical analysis shown in Table 2. Eq. (7) was applied to calculate MP’s axial stiffness. Piles’ axial stiffness estimated by Eq. (5), kvs, and estimated by slope of load-settlement curve based on Fig. 5, kve, are calculated in Table 5. It is seen that kvs obtained in the loading test is good agreement with that proposed by KHS for WMP and PCP. However, for comparison of conventional micropiles, the value of kvs showed that stiffness of conventional micropile is significantly affected by its socket length, but it is not considered in Eq.(4).

4.3 Construction Procedure of Vertical Extension of an Existing Building

Load sharing ratio (LSR) was used to describe the percentage of carried load of a pile divided by the applied load to the foundation. The definition of LSR for a pile is shown below:

The carried load of a pile was measured on the head of the pile. Fig. 7 illustrates influence of micropile’s length and shape on load sharing capacity of underpinning pile of total applied load. During loading and unloading, applied loads were carried by existing piles only. Each PCP carried 25 % of the total load. After installation of a micropile and reloading to the underpinned foundation, the micropile began to carry partial loads. The load sharing capacity increased with increase of applied load while LSR of PCP gradually decreased from 25 %. As shown in Fig. 7, LSRs of WMP and CMP3 with high stiffness increased sharply with applied loads. On the contrary, LSRs of CMP1 and CMP2 increased slowly with applied loads and gradually converged. After loading was completed, the LDR of WMP was the highest, followed by that of CMP3, CMP2, and CMP1. It also can be seen load sharing capacity of underpinning is increased with increasing socket length. 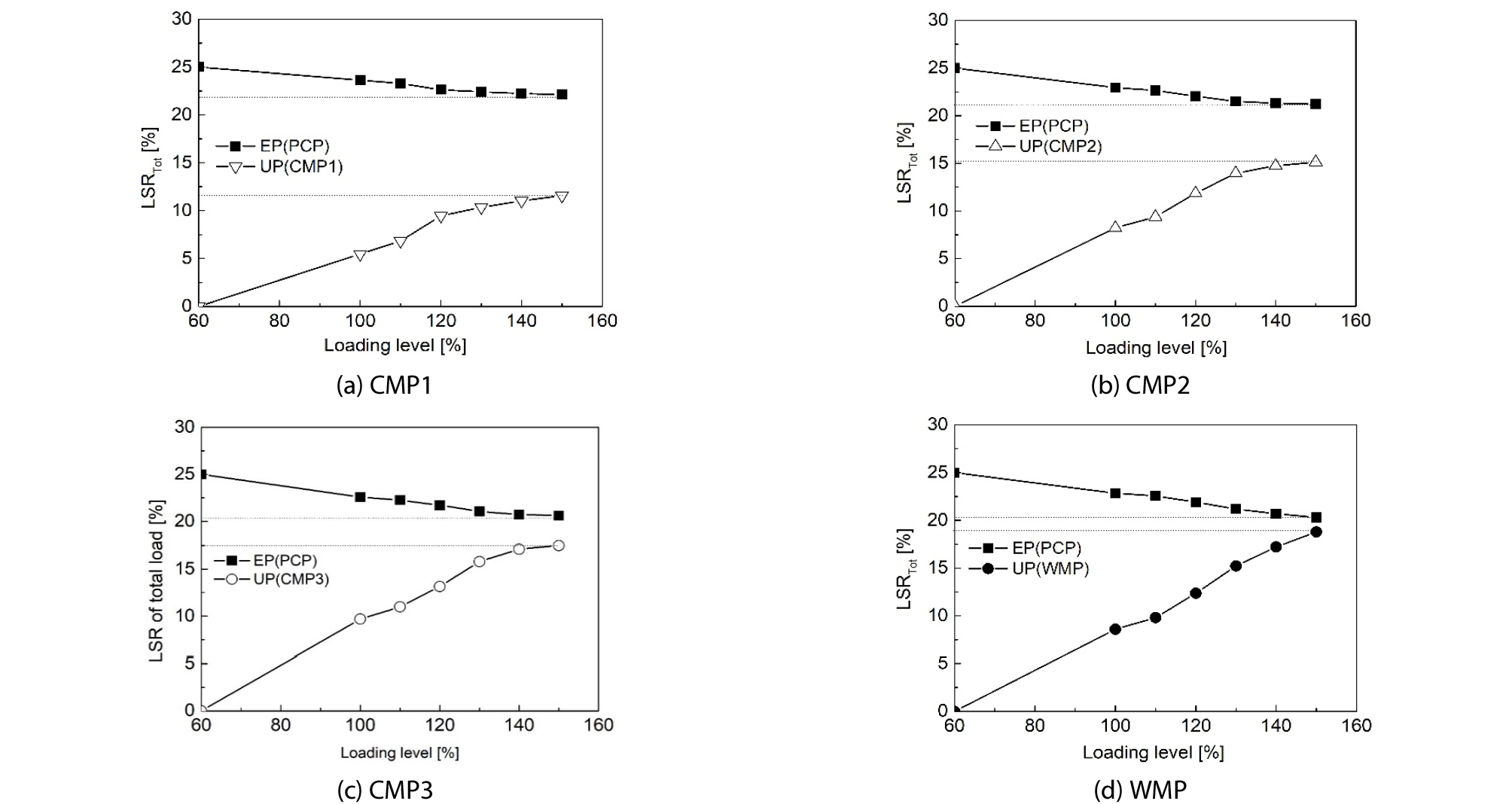 In this study, FEM numerical analysis was carried out to investigate waveform micropile’s underpinning effect during building remodeling with vertical extension. Results were compared to those of foundation underpinning by conventional micropiles with different lengths.

(2) Results of numerical analysis demonstrated that underpinning with micropile could reduce the total settlement of foundation and carry partial loads from existing piles. The underpinning performance of conventional micropile increased with increasing socket length of a pile. This is because socket length plays an important role in increasing axial stiffness of a pile.

In addition, as the limited numerical results in this study, field tests or centrifuge model tests will be carried out in order to obtain more accurate results.

This research was supported by a grant from “Development of Technologies for Structural safety on Vertical Extension for Existing Apartment Buildings” which is funded by the Korea Agency for Infrastructure Technology Advancement. An earlier version of this paper was presented at KSCE 2018 CONVENTION and was published in this Proceedings.

Go to ContentsGo to Main NevigationGo to Footer